A Pandemic Window That Had Lessons & Meaning 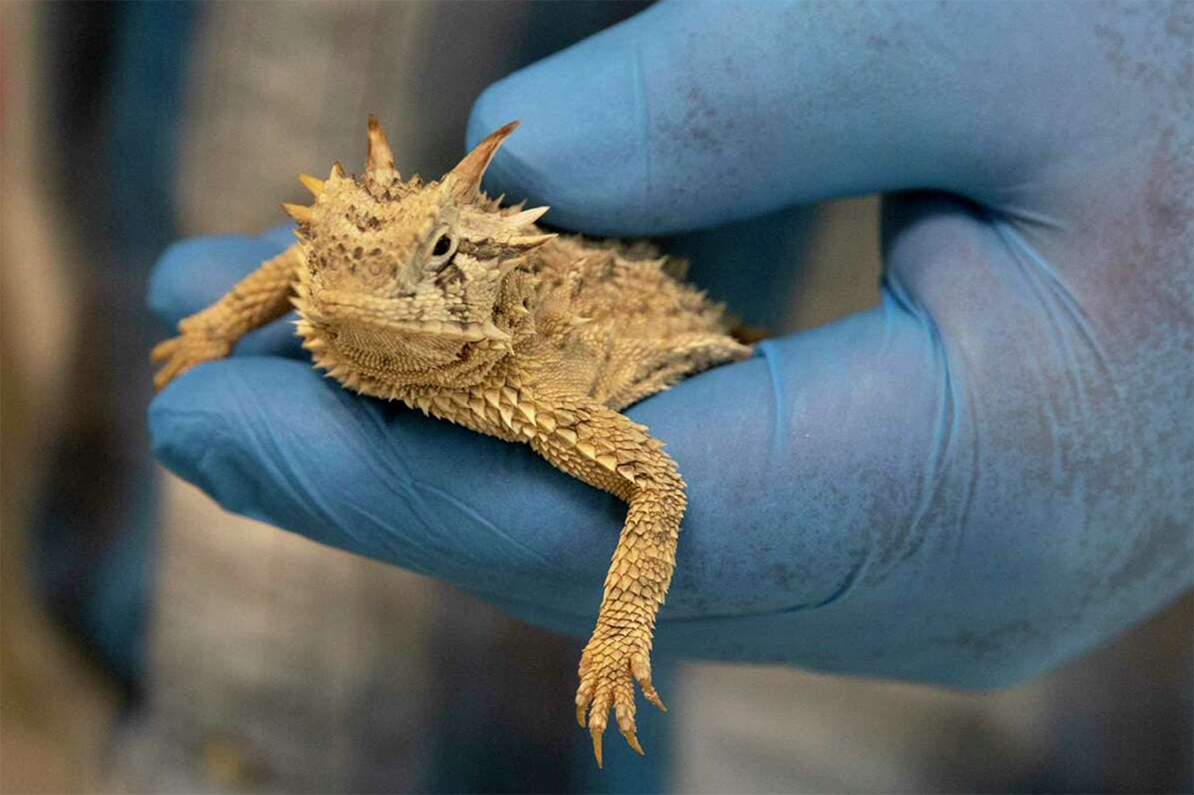 By Stephanie Johnson
​May 6, 2021
Lizard-like amphibians with elongated bodies and tails, short limbs and external gills are the focus of scientists keeping tabs on groundwater health in Rebecca Creek.In April, Guadalupe-Blanco River Authority (GBRA) staff headed out to the area with U.S. Fish and Wildlife Services (USFWS) and Texas Parks and Wildlife Department (TPWD) scientists to collect salamanders to help determine what species are present and whether they warrant federal protection under the Endangered Species Act. 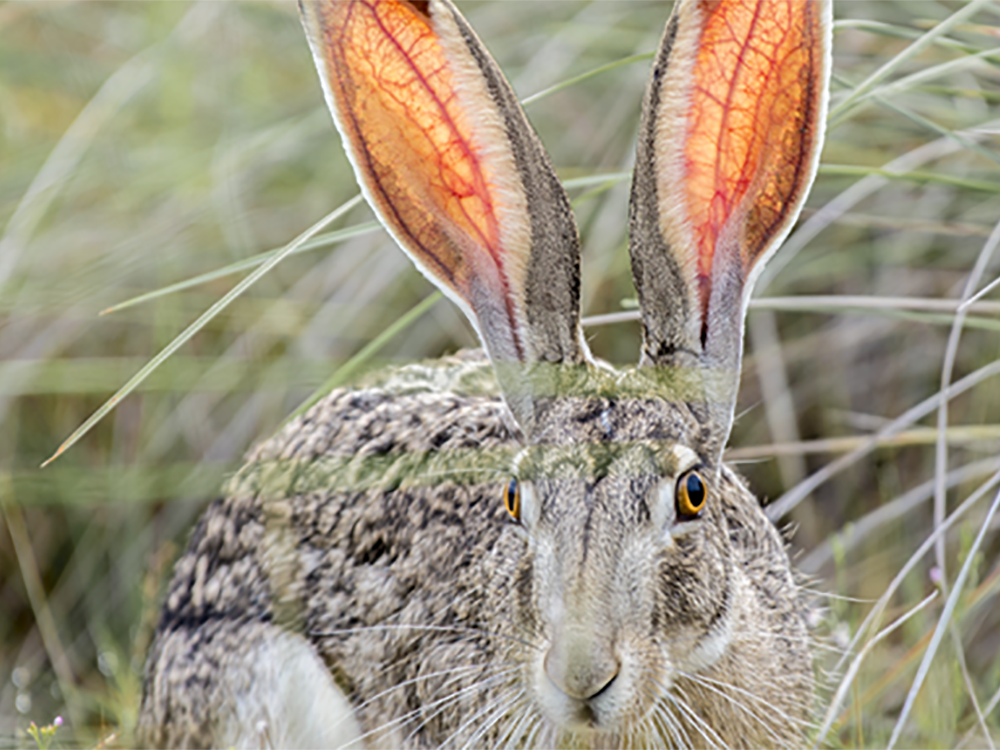 For too long, a labyrinth of roads, fences and sprawl has penned wildlife into smaller and smaller habitats. This can push whole ecosystems out of balance, cut off genetic flow between populations, leave animals short of key resources, interrupt migration cycles and leave species more susceptible to other challenges like disease, wildfires and climate change.
​
It can also lead directly to animal deaths as wildlife attempt to cross busy roads. The Humane Society estimates that vehicle collisions kill more than one million large animals each year on U.S. roads—that’s roughly one large animal every 26 seconds, and that’s not counting smaller mammals and birds who are struck. Endangered animals, such as the ocelot, are especially at risk. Dr. Sharon Wilcox—Texas representative for Defenders of Wildlife—noted that “the leading cause of ocelot deaths in Texas are vehicular collisions.”

Lynn Cuny—founder and executive director of Wildlife Rescue and Rehabilitation—noted the saddening fact that “because of urban encroachment,” there is nowhere “where wild animals are not affected by us and everything that comes with us. There is not one animal anywhere who is truly safe from a vehicle.” 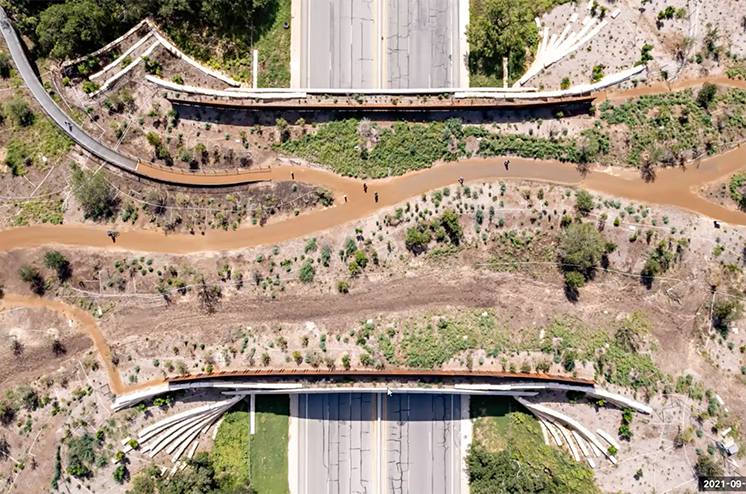 Photo of the Robert L.B. Tobin Land Bridge in San Antonio provided by Jewell Lee Cozort
We can’t undo all of the development in this country, but we can get clever about how to connect these small habitat “islands” by using corridors and restoring some semblance of complete ecosystems. Doing so can give wildlife the space they need to survive. Corridors can be made up of single projects or networks of small-scale infrastructure, including wildlife crossings like the Tobin Land Bridge in San Antonio, conservation easements and wildlife refuges to provide areas of core habitat along which animals can move like the Neches River Corridor; and tunnels under highways like at the Laguna Atascosa National Wildlife Refuge.

Jewell Lee Cozort shared images of underpass crossings
Research studies show that wildlife crossing structures and fencing designed to facilitate the passage of animals over or under our highways are highly effective, reducing wildlife-vehicle collisions by as much as 97%.

The Bipartisan Infrastructure bill passed by the Senate includes $350 million in funding for a pilot grant program to reduce wildlife collisions and improve human safety on roads. This would fund overpasses, underpasses, and fencing on highways.

In addition, in the last Congress, the Wildlife Corridors Conservation Act, or HR 2795 in the House and S 1499 in the Senate, would dedicate $50 million a year in grant funding for wildlife corridors, including other strategies like conservation easements, encouraging private landowners to remove fencing in strategic places, planting certain flora along migratory routes for birds and pollinators, and removing and/or re-constructing old infrastructure such as dams and spillways so that fish can safely swim upstream.

Texas is home to tens of thousands of native animal and plant species. These species form the fabric of over 800 habitat types, from bottomland hardwood forests, big tooth maple canyons, to black grama grasslands. Hundreds of these species occur only in Texas and nowhere else in the world. The Wildlife Diversity Program works to conserve this fabric for the benefit of current and future generations. 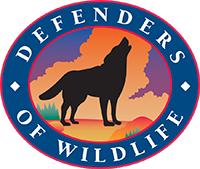 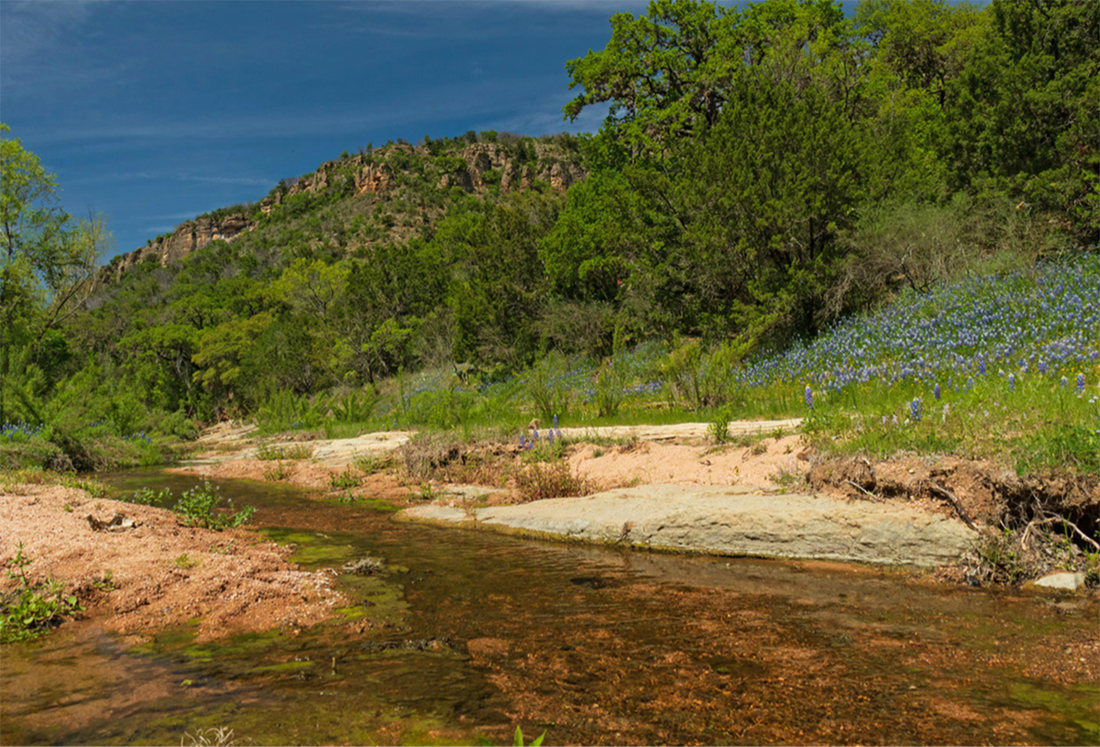 HABITAT LOSS
As our population grows, more and more land is converted for human needs. More than half of America's wetlands that support waterfowl and wildlife have been drained and/or plowed. Currently, Texas has over 25 million residents (2010 Census) residents, with 82% living in urban areas. The population of Texas is predicted to reach 40 million residents by the year 2050.

The biggest threat to wildlife and habitat today is the break-up of large land holdings into smaller tracts. This division of ownership and associated change in land use is referred to as land fragmentation. As intact ranches become smaller “ranchettes”, wildlife populations are subject to many pressures including loss of open space from development, increased hunting pressure, proliferation of potential predators (dogs, cats and other carnivores), and introduction of exotic species, to name a few.

Causes of habitat loss.
TEXAS ECOREGIONS
​Due to its size and geographic location, Texas is unique among states. Covering 266,807 sq. miles, it is second only to Alaska in land area. A large area of land will usually have a great deal of variation in climate and landscapes, factors influencing habitat diversity. The state has impressive topographic diversity, including 91 mountain peaks that are a mile or more high.

Our geographic location is a crossroads where eastern habitats meet western ones and southern subtropical habitats meet northern temperate ones. The annual rainfall can range from eight inches in the deserts of far west Texas to 56 inches per year in the swamps of east Texas.

Generally, Texas is divided into 10 natural regions or ecoregions: the Piney Woods, the Gulf Prairies and marshes, the Post Oak Savanah, the Blackland Prairies, the Cross Timbers, the South Texas Plains, the Edwards Plateau, the Rolling Plains, the High Plains, and the Trans-Pecos. 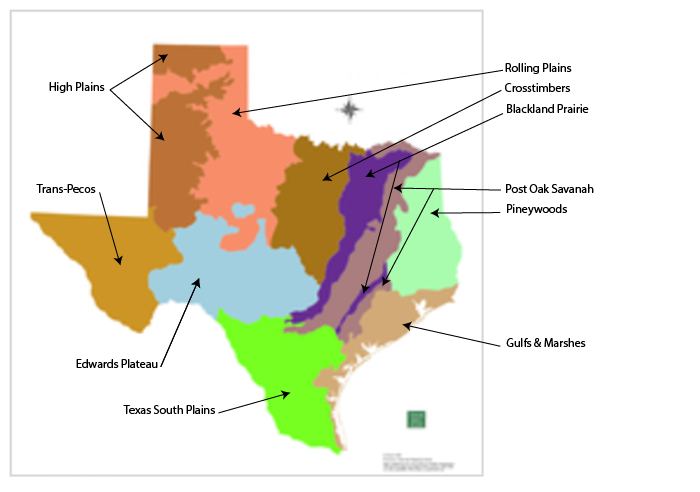 THREATENED, ENDANGERED, AND PROTECTED ANIMALS
Endangered and Threatened Nongame AnimalsIn Texas, animal or plant species of conservation concern may be listed as threatened or endangered under the authority of state law and/or under the U.S. Endangered Species Act. Species may be listed as state threatened or endangered and not federally listed. The state list deals only with the status of the species within Texas. A federal listing means that an animal is in decline throughout its entire range which may encompass several other states or nations.

Endangered
These animals are some of the endangered species in Texas. 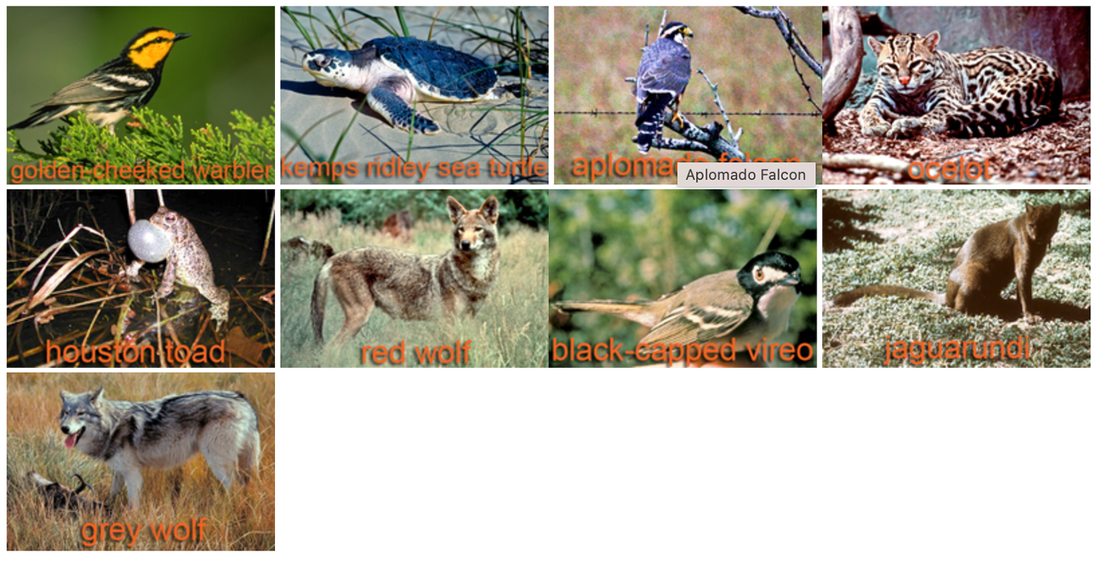 Threatened
These animals are some of the threatened species in Texas.

Black bears are threatened in Texas and cannot be hunted or killed. Please report black bear sightings or mortalities, and mountain lion sightings, harvests, or mortalities to (512)389-8047.

The Texas indigo snake, Drymarchon melanurus erebennus, is a subspecies of the Eastern indigo snake. It is listed as threatened in Texas and cannot be hunted or killed. It is found in southern Texas and Mexico. They are large snakes, adult males are over 7 feet long. The indigo snake eats a variety of small animals, including other snakes. It is immune to the venom of the rattlesnakes.

Protected Birds
Hawks, owls, eagles, and all other nongame birds and songbirds (except for the few unprotected birds listed below) are protected by various state and federal laws and may not be killed, taken from the nest, picked up, or possessed for any reason, and their feathers may not be possessed or sold. Arts and crafts may not include these protected species under any circumstances.

Most of the birds you will see when hunting will probably not be game birds. Studying them in the field is not only useful to your hunting knowledge, but also a very enjoyable pastime. Many hunters become avid birders.

Unprotected Birds
The only birds not protected by any state or federal law are European starlings, English sparrows, feral rock doves (common pigeon, Columba livia) and Eurasian collared-doves; these species may be killed at any time, their nests or eggs destroyed, and their feathers may be possessed. Yellow-headed, red-winged, rusty, or Brewer's blackbirds and all grackles, cowbirds (does not include cattle egret), crows, or magpies may be controlled without a federal or state depredation permit when found committing or about to commit depredations on ornamental or shade trees, agricultural crops, livestock, or wildlife, or when concentrated in numbers and in a manner that constitutes a health hazard or other nuisance.

Bats
Bats in Texas may not be hunted, killed, possessed, purchased or sold; however, bats may be moved, trapped, or killed if inside or on a building occupied by people. A person may transport a bat for the purpose of laboratory testing if there is a rabies concern.

Bats are very misunderstood animals. They are extremely beneficial creatures to humans. They help control pests by consuming tons of insects each night and are vital pollinators and seed-dispersers for a variety of plants. In the summer, Texas is the summer home to the migratory Brazilian free-tailed bats. Millions of these bats will inhabit caves and structures such as bridges. There is a famous colony at the Congress Avenue bridge in downtown Austin. The best time to see them is in August, when young free-tailed bats begin to fly with their parents on nightly feeding flights. Because most free-tailed females give birth to 1 pup each year, the population in some nursery roosts almost doubles. In the fall, most of these bats will migrate south for the winter.